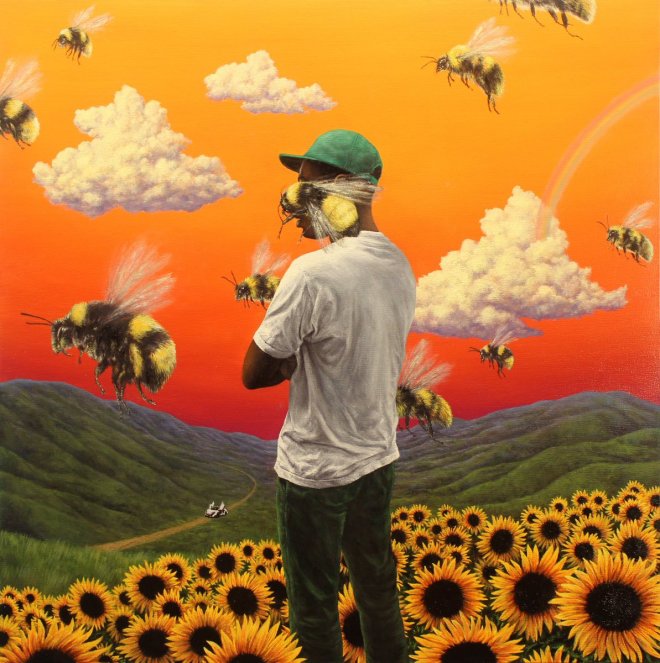 “Flower Boy,” marketed as “Scum Fuck Flower Boy,” is Tyler, The Creator’s fourth studio album and it’s more than any of us could’ve expected.

I believe that the point of the “Scum Fuck Flower Boy” title is to juxtapose Tyler’s two alter egos: “Scum Fuck” and “Flower Boy.” “Scum Fuck” is kind of like the more vulgar immature side of Tyler while “Flower Boy” is his more mature emotional persona. But I don’t really see these two sides conflicting very much on the album, instead it seems that the album serves as an introduction to this new “Flower Boy.” 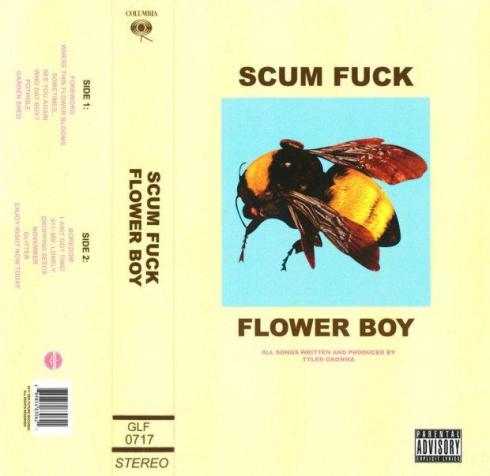 The album starts off with “Foreword,” a song that brings up worries about losing motivation as an artist (“How many cars can I buy ’til I run out of drive?”) and having suicidal thoughts (“And if I drown and don’t come back/ Who’s gonna know?”), setting the stage for the intimacy and personal subjects that lie within the rest of the record.

Songs off the album are much softer than something you’d normally expect from Tyler such as “See You Again,” a sweet love song about someone who lives in Tyler’s fantasy, featuring Kali Uchis’ elegant and soulful voice, and “Glitter,” another upbeat ballad where Tyler confesses his love to someone via voicemail. But you still get a bit of that loud upbeat vulgarness that we’re used to hearing from him in “I Ain’t Got Time” and “Who Dat Boy.” His catchy lyrics and beats in tracks like “911/Mr. Lonely” where he repeatedly sings “call me sometime/ please ring my line,” make it tempting to sing along.

“Flower Boy” differs very much, style wise, from previous projects such as “CHERRY BOMB” that used many different distorted sounds that were almost just clashing with each other. But this album manages to use an array of sounds in a way that’s much smoother. “Garden Shed,” by far my favorite track, is an example of the amazing instrumentation used on the album because it uses the most ethereal guitar riff, making it so beautiful. You don’t get any of the angry or amusing tones here that you get from his past work. Instead, we see a more emotional and serious side of Tyler which is why so many critics say that he’s matured.

Personal topics are often brought up in his lyrics including loneliness, materialism, depression, falling in love, nostalgia, his sexuality and personal growth. In “Where This Flower Blooms,” featuring Frank Ocean’s vocals, Tyler tells us about his rise to stardom, going from being a poor kid with dreams to making it as an artist and turning those dreams into reality, and how fame has changed him as a person. We can see that Tyler is dealing a lot with self-discovery.

The album finishes off with a groovy colorful four minute instrumental that includes keyboard and violin. It’s nice to hear the album ending on quite a positive note.

With deep and intimate themes, beautiful instrumentation, and an array of talented contributors, I must say that this is Tyler’s most beautifully crafted work yet and definitely one of my favorite albums of the year.

One thought on “Flower Boy”